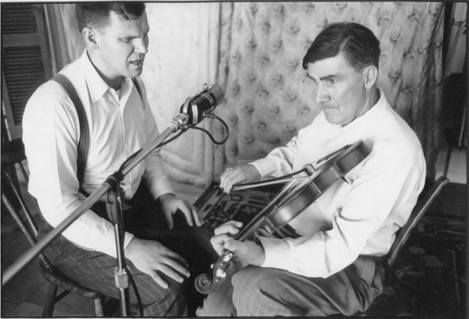 This June 11-17 for the singing class at Steve Kaufman’s Maryville, TN Kamp, we are only using traditional songs from the mountain areas of Tennessee, North Carolina, Virginia, West Virginia, and Kentucky.  It’s been a fun project picking the songs and realizing the patterns of sharing music up and down the mountains.

My favorite old-time recordings are the earliest examples of a traditional performance that I can find.  I have to wonder when and who made the first impression on the world through this special song. The earliest recordings to choose from are from the 1920s and 1930s, and sometimes folklorists’ accounts songs before the age of recordings.  Not surprisingly, the same names come up again and again, of both performers and of the most popular songs.

I was born in Covington, VA (near the center of the West Virginia line), and lived there until I went to college.  Since then I haven’t strayed too far from the southern Appalachians.  As the ballad singer Berzilla Wallin said, “I’ve traveled all over these mountains.”  My musical life has taken me to Eastern Kentucky, to teaching at ETSU for 3 years in Johnson City, TN near the Carter Family Homeplace, to 6 years living on the edge of the Smoky Mountain National Park in Bryson City, NC playing for the trains,  to 20+ years of festivals like Clifftop, WV and Mount Airy, NC, and now to beautiful Asheville for 17 years, home of folklorist Bascom Lamar Lunsford, not far from the famous traditional ballad singers still living in Madison County.  After all these years of going and singing and playing and dancing and being a music history nerd, I’ve noticed there are some songs you hear a lot, and when you look up who sang them first, you find some key groups that tend to stand out.

In the Clinch Valley in Virginia, The Carter Family catalog is a great representation of old songs from that area.  They recorded more than 300 songs together.  AP Carter collected the songs, travelling to visit with singers near his home to learn from them, like Leslie Riddle in Burnsville, NC.  Later the Stanley Brothers (also from Clinch Valley) sang a lot of the same songs, and some more that they knew from growing up there.  A little west of there is Ashe County, home of the 78 recording artists Grayson & Whitter, who recorded over 40 songs together in the 1920’s and 30’s.  Not far is Galax and Mount Airy, homes to famous fiddlers conventions, and Deep Gap, home of Doc Watson.  Songs, songs, and more songs.

There are still spaces left in the class, so please join us if you are interested: http://www.flatpik.com/Steve-Kaufman-Acoustic-Kamp.  Our goal is to meet every day and sing the songs of the mountains, try to ring the hills with the familiar sounds of their favorite songs.