Last Spring, I went into Echo Mountain Studios in downtown Asheville to see how many songs I could record by myself in one day, with the help of patient engineer Julian Dryer. The resulting tracks were mostly dark solo Madison County ballads, several Ola Belle Reed songs, and some random picks from the old-time vault. I even played the banjo a couple of times, which made me think to call Travis Stuart to come by and play some back-up guitar, and some banjo on a tune or two. At the end of the day, The Swayback Sisters were recruited to add some harmonies on a couple of songs, and it all turned out beautifully! Right now, the final mixes are currently being mastered by Chris Rosser at Hollow Reed Studio in West Asheville, and Mary Ellen Davis at Pawprint Biz is designing the cover, so it won’t be too long til it’s all ready. Stay tuned, I’ll let you know when it comes out. Cheers ~Cary F. 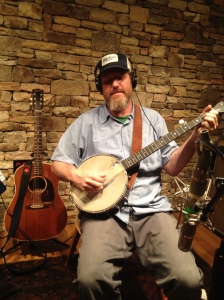